A cluster of design-related firms grows in west Houston, creating a one-stop specialty district of talent, services, and retail that can drive economic growth

In the course of a recent afternoon, interior designer Pamela O’Brien picked up porcelain tile samples at Thorntree, ordered samples of wallpaper from Fabric House, shopped for office furniture at Johnson Simon, and checked orders for plumbing parts at Fixtures and Fittings. She then visited three more building specialty stores all found within the same half-mile radius. “You really could build a house here,” she said, “ going from shop to shop..”

O’Brian’s, shopping spree represents just a smattering of the design-related businesses squeezed into a square-mile wedge of west Houston bordered by Interstates I10 and 610 and former MKT railroad. At least 95 businesses – ranging from flooring to lighting to architectural services – have cropped up here, with more on the way, including custom home builder Frankel Building Group Studio, stone and tile provider Pomogranit+ADR and wood flooring company Vision Wod.

In the area, with some have dubbed the Houston Design District, has become a classic example of what economic development specialists call a cluster, a dense concentration of similar companies that testifies to the enduring benefits of physical proximity, even in the internet age. Clusters-think movies in Hollywood, technology in Silicon Valley and, of course, energy in Houston- provide the kind of access to customers, talent pools, support services and the exchange of knowledge that attracts more companies, talent and investment in the kind of virtuous circle that drives economic growth.

For example, Scott Frankel, co-president of Frankel Building Group, said he decided to relocate from Woodway to the Design District because he recognized the advantages of being closer to services that his company and customers need. He said he envisioned a future in which people wanting a custom home could chat with architects in the office, then walk next door to the Lady Design Center, where Frankel has a showroom, to consult with designers. “We look at his as more of a campus approach,” Frankel said. “We want to be where the action is.”

The development of the design district holds lessons for efforts aimed at spurring new clusters, including Houston’s attempts to build a tech escort, Clusters don’t pop up overnight, but rather grow over decades, fertilized by an almost magical mix of capital, talent and entrepreneurial vision, research shows.

They build on the particular strengths and advantages of a region and typically develop around anchor companies and institutions. Silicon Valley grew up near Stanford University and the tech pioneer Hewlett Packagard while Boston’s biotechnology cluster took root near Harvard University, the Massachusetts Institute of Technology and leading research hospitals.

Gaby Rowe, CEO of local startup hub Station Houston, is trying to build a local technology hub by providing a central location where entrepreneurs and investors can get together , whether by appointment or serendipity. Ideally, Rowe said, a cluster brings interaction among different people trying to solve similar problems, leading to unexpected innovations. “Having those moments of physical overlap is the final magical ingredient that gives each member an exponential boost,” Rowe Said.

The Design District can trace its roots to the 19080s, when both Lads Design Center and the Houston Design Center moved to the area, then filled with warehouses along the railroad. Ladco was originally a furniture warehouse that used the railroad to receive shipments, but eventually evolved from a distributor into a showroom, where designers could browse and purchase furniture.

Ladco later launched Ian in-house team of designers to help people reimagine their homes and began of firing an expanded selection, including textiles and lighting fixtures. The Houston Design Central, originally known as the Resource Center, rented space for vendors to show and sell furniture, flooring and other materials to interior designers. Those businesses attracted an even wider range of tenants to Houston Design Center, including architects, commercial developer, and the suppliers artwork to grace a corporate lobby.

Some of Housotn Design Center’s businesses served as incubators for new ones, Leighton Hale, for example, worked at the front desk of Memorial Antiques and Interiors, which leases space from the design center and subleases it to small antique dealers selling everything from Country French antiques to mid-century modern furnishings and art. After several years, Hale launched his own antiques company, leasing space at Memorial Antiques before opening his own 12,000 foot-store, Back Row Home, nearby in 2012. Hale, said it was important for him to stay in the area because that’s where designers shop. “Usually the way it works,” he said, “is they come out and hit all of us at one time.”

The concentration of companies that share customers and use one another’s services also crates a hospitable environment for specialty businesses. For example, the firm Silsby Nunes represents furniture companies that sell their products through architects and designers. One of the founders, Beth Silsby, said the company moved to the Houston Design Center a year ago because architects, designers, and other furniture dealers are located nearby, with more moving into the area soon.

Silsby added that the variety of specialty businesses is an added perk that allows her to provide extra levels of services to clients. When a client needs something outside of her specialty, she can just walk them over to an expert, as she recently did for an anergy company that also needs patio furniture and umbrellas. “We tend to share and recommend and work together on things,” she said.

Pomogranit+ADR, which sells stones ranging from subtle grays to fantastically striated greens and golds, recently signed a lease to open a location in the Design District for similar reasons. “We do businesses with a lot of architects and designers who’s offices are 10 minutes of there,” said the owner, Jay Sethia. “For us, the most important thing, trying to find a location, is its proximity to the actual Design Center.”

As the Design District has gathered momentum, the Housotn Design Center and Ladco Design Center have made further investments in the area. Ladco for example, is adding 20,000 square feet to its 80,000 square-foot facility and has partnered with two other companies to redevelop an additional 67,000 square feet in adjacent properties that it acquired.

The redeveloped space will be leases to architects, flooring providers and other tenants, including Frankel Building Group. The plans also call for attracting a restaurant, where architects and designers could bring clients to discuss their visions over a quiet bite and a beer.

On a recent visit to his new office, Frankel he reflected on a experience he had about 13 years ago, while touring one of his buildings with a real estate agent. The agent pointed to the window frames, counters and other details that had gone out of style within the previous year. “And I’m telling you this guy was right,” Frankel said. “As a home builder, you fall into a repetition.”

Frankel doesn’t want to fall behind on the most current trends in homes again. That’s part of the edge he hopes to gain from the move at the end of October into the Design District. “We want to continue to evolve,” Frankel said. “And it required our architectural staff and our interior design staff and, most importantly, the other designers we collaborate with and people like the good people of Ladco to help us keep tabs on what’s evolving and how things ar flowing. Because the interior design space- it doesn’t slow down.” 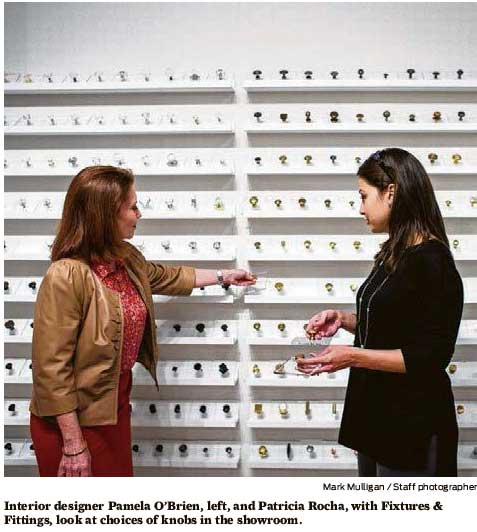